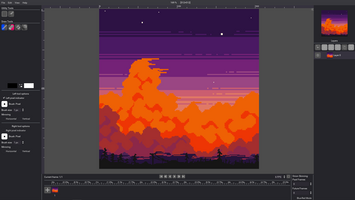 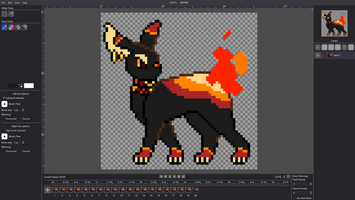 I have to say, this update was finished earlier than I expected. If you asked me some weeks ago about when v0.5 would be released, I'd say early 2020! Fortunately for all of us I was wrong, and it released just in time for something new that Orama is doing! What are we doing, you ask? I'll let you know soon, so make sure to read this blog post until the end. But for now, the changelog:

I already thanked them numerous times, but I can't thank them enough, so thank you Calinou and azagaya for contributing to Pixelorama v0.5!

But wait, there's more! Orama Interactive has launched a public Discord server for everyone to join, and form a wonderful community around Pixelorama, and all of Orama Interactive's projects! We would be very happy to have you on board! <3

And to prove to you that we are indeed amazing community, as we grow, we will host certain events that are usually to promote some kind of charity or fundraiser that helps improve our world. In fact, we are doing something like that right now for #TeamTrees! And the best part is, if you use Pixelorama to draw your tree and record it in video form, we will take all of your videos and put them in our YouTube channel, as a compilation video!

We can already see how excited you are, so let's not waste any more time! Join our public Discord server now, and start drawing! Let's unite to make this world a little better!

Also, we created a new website that will be the home of our projects. If you are interested in what we do and would like to see this website up and running for a long time, consider donating on PayPal and Ko-Fi, or directly on itch.io! Thanks for your time and as always, happy painting! Bob Ross would be very proud with all the happy little trees you are going to make!