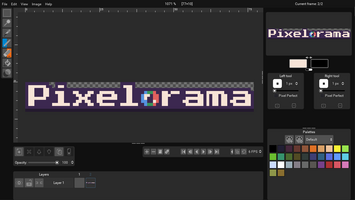 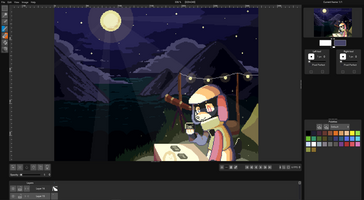 This took a while. Four months have passed since v0.6, the world has changed drastically, and finally v0.7 is ready to be released. During this time however, one thing was increasing; The support we received from all of you. It fills our hearts with joy to see people being excited about Pixelorama, and to see you all make amazing drawings with it.

I think the highlight of these four months was the Godot's Desktop/Console Games Showcase video where Pixelorama made it in! We'd like to thank everyone from the Godot team for including us in the Showcase video, and for creating Godot itself. Without it, Pixelorama would not exist. You can see Godot's Showcase here:

So what has changed? The biggest change is the new timeline. Layers have been merged into it, and it has become cel-based. A cel (celluloid) is an image that refers to a specific layer and frame. Basically, a frame is consisted by multiple cels, each for every layer. This took a long time to implement, because a lot of stuff had to be remade. And to be honest, I wasn't 100% motivated to do it, it felt like a chore having to remake the entire timeline. But eventually I did it and it has been working perfectly so far. I would also like to thank all the people who have contributed for this release. A lot of the new changes would not have been made if it weren't for them. So, what else has changed? Well...

We are also working on online Documentation for Pixelorama. It's currently a work in progress and is missing a lot of pages, but eventually it will help users who are new to Pixelorama, understand it better!

A while after v0.6 got released, we also launched a Crowdin project for Pixelorama, where all of our translation files are being hosted. If you're interested in translating Pixelorama, check it out!

For v0.7, we also hosted our first splash screen art contest in our Discord server. Those who were interested had to join our server, read the rules in the pixelorama-splash-screen channel, and submit their art piece before the deadline! If you are interested in joining the next one (when that time comes), join our awesome Discord community!

Thank you all for taking the time to read this blog post and for supporting us. We appreciate every and each one of you, but we'd like to give special thanks to our contributors, our translators and our donors! If you wish to support us, you can become a Patron and receive exclusive awards, or buy Pixelorama from itch.io! Happy painting, and stay safe!

i am late ;) downloading now ty

I'm sorry, this all looks very nice but I'm still having the tablet related issues that I got in 0.6.2.

Also the pen and erase tools don't work correctly when I right click using the graphics tablet. It will deposit or delete a single pixel where I was pointing and then won't do anything else. So basically I can't really use the right tool anymore.

All features work fine if I click with my touchpad but... 0.6.1. works perfectly with my tablet.

Thank you for commenting. We will look more into this and try to solve the issue!