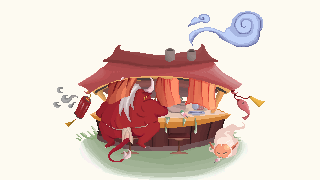 Artwork by Uch, one of the artists for v0.10’s splash screen artworks.

Today is a special day for Pixelorama. Exactly three years ago, version 0.1 was released and the project was open sourced! To celebrate Pixelorama’s 3rd birthday, we have not one, but two presents for you!

First of all, we are releasing a new version of Pixelorama, 0.10.2. While it’s not a huge update in terms of new features, it is bringing huge performance increases and bug fixes, so it is highly recommended that you update. Keep reading to see the entire list of the changes.

Before we get to the second present, we would just like to remind you that if you wish to support us, you can become a Patron and receive exclusive awards, or buy Pixelorama from itch.io!

As for the second present… We have kept our promise, and we have finally open sourced Voxelorama! This means that it is now available for free for all of you, licensed under the MIT license, the same license as Pixelorama’s. The project’s code is available on GitHub. Please note that Voxelorama is still in Early Access and is not recommended for production yet. Feedback and contributions are welcome, of course!

The changes that have arrived in Pixelorama v0.10.2 include:

Thank you all so much for supporting us these three amazing years. We appreciate every and each one of you, with special thanks to our contributors, our translators and our patrons! With your love and support, we will keep preparing even more amazing stuff for you. Happy painting, and keep pixelating (and voxelating?) your dreams.

time to check out voxelorama...